How to Know if You Have Bed Bugs: 7 Early Signs to Look For

Worried about having bed bugs in your home? In this article, we’ll explain the 7 early signs of bed bugs that you should look out for:

Bed bugs are notoriously hard to find and even harder to get rid of, especially if you live in densely populated places like New York City.

But despite their sneakiness, it isn’t impossible for a vigilant homeowner or apartment renter to recognize the early signs of a bed bug infestation.

One of the best ways to protect yourself and your family from these tiny, blood-sucking pests is to find and exterminate them early on — before they can reproduce and spread.

This article will explain the 7 early signs of bed bugs, as well as where bed bugs hide and how to perform a simple visual inspection of your home.

These signs of bed bugs are ranked in order of how much certainty each warning sign can provide when it comes to confirming the presence of bed bugs, especially at the beginning of an infestation. 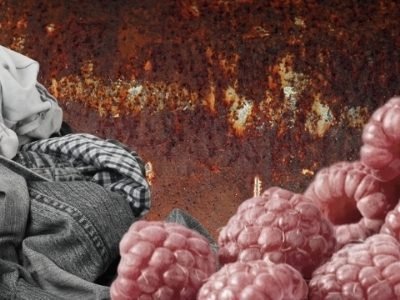 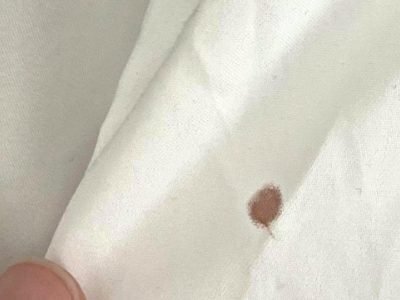 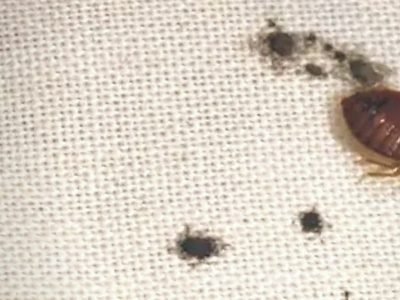 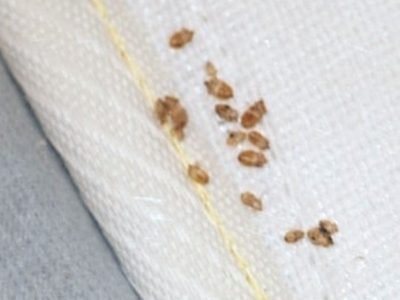 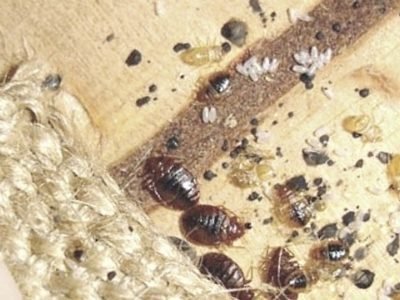 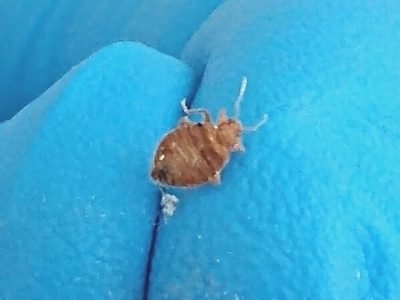 If you suspect that bed bugs have invaded your home, it’s well worth your time to understand and familiarize yourself with these early warning signs.

Sometimes, the first hint that something is amiss comes from our sense of smell. If you notice an unusual, musty odor in your bedroom that doesn’t seem to originate from an obvious source — like a pile of dirty laundry — it might be an early sign of bed bugs.

Bed bugs emit “alarm” pheromones in response to being bothered or threatened. These pheromones produce certain odors that may smell slightly sweet or musty. People who have experienced it firsthand describe the smell as somewhat similar to raspberries, coriander, cilantro, or almonds.

Normally, the smell of pheromones is very faint — practically imperceptible to the human nose. Unless you’re a trained bed bug-detecting canine, your chances of noticing the raspberry-like pheromone smell from bed bugs are very low.

When you have a large number of bed bugs living together, the smell of their pheromones gets mixed together with the odor of dead bed bugs, shed shell casings, and bed bug excrement. The result is an unpleasant, rusty smell that gets worse as the infestation grows more severe.

Compared to other early signs of bed bugs, odor is typically the least reliable. That’s simply because when there are only a few bed bugs around, their odor is too faint for humans to notice. Furthermore, most people aren’t familiar with the scent of bed bugs — or a bed bug infestation — so even if you sense something, you’re likely to mistake the smell for something else.

Many people consider waking up to find mysterious insect bites as the first sign of bed bugs.

Bed bugs are considered nocturnal insects that prefer to feed on our blood while we sleep. Therefore, their bites typically appear on skin that is exposed during the night. The most common places where people get bitten are the arms, hands, and legs.

However, pest control professionals agree that bites alone are not enough to diagnose a bed bug problem. That’s because different people can react very differently to bed bug bites, so there’s no definitive way to distinguish them from other insect bites. In fact, a whopping 30% of people don’t exhibit any skin reactions at all to bed bug bites.

As a side note, bed bug bites are usually not dangerous and do not transmit any known diseases. However, some people may experience allergic reactions to certain chemicals in bed bugs’ saliva. If you’re experiencing severe itchiness, painful swelling, blisters, fever, or flu-like symptoms after being bitten, you should seek professional medical attention.

Even though we don’t notice bed bugs when they’re feeding on us, they don’t always get away unscathed.

After a bed bug becomes engorged with blood, its original flat, seed-like appearance changes into a round, bloated form resembling a tiny football. If you suddenly move or shift your body in your sleep, you might inadvertently crush or squeeze a bed bug that just finished feeding.

While it doesn’t usually kill them, it can cause some of the blood they just fed on to leak out and create a noticeable red or rust-colored stain.

If you see something that appears to be a bloodstain on your sheets, clothes, or pillow, check your body first to see if you can find a cut or scab that might be the cause. If there’s no other explanation for the bloodstain, then it might have been left behind by an unlucky bed bug.

Sometimes, bloodstains might also come directly from bed bug bites. Bed bug saliva contains an anticoagulant that prevents blood from clotting while they feed. After they finish their meal, the bitten areas may continue to bleed for a short while.

Compared to the bloodstains that we described above, bed bug fecal marks (also called “fecal spotting”) are much smaller and darker.

These small, dark spots resemble an ink dot from the tip of a pen or marker. Their average size is about 2 to 4 times larger than a period at the end of this sentence.

Fecal marks come from bed bug droppings, which consist of digested human blood. The digested blood appears dark brown or black in color and, because it contains iron, will give off a faint, rusty smell that contributes to the overall unpleasant odor of a bed bug infestation.

On fabric, bed bug fecal marks can be quite difficult to wash out. Water causes them to smear in a distinctive fashion, resembling magic marker stains.

Pregnant female bed bugs lay between 1-7 eggs per day, which typically hatch in the next 7-10 days.

In terms of appearance, bed bug eggs are about 1 millimeter long, pearly white in color, and ovular in shape. They resemble tiny grains of rice that are miniaturized to the size of a pinhead.

Eggs are visible to the naked eye, but they can be difficult to recognize unless you know what you’re looking for. At the end of each egg is a hinged cap, which is where the newly hatched beg bug emerges from. Bed bug eggs that are more than 5 days old have a darkened eye spot — however, this can only be seen under a microscope.

Here are some pictures of what bed bug eggs look like.

Similar to fecal spotting, bed bug eggs are also more common around harborage areas. However, female bed bugs tend to wander around when they’re pregnant, potentially spreading the infestation to other areas as well as neighboring apartments.

When depositing their eggs, they use a glue-like material to adhere them to surfaces. As a result, you’ll most likely find these tiny, white eggs loosely stuck to crevices between fabrics or wooden surfaces — although they could really be anywhere.

If you find bed bug shell casings, also known as husks or shed skins, there’s a very high probability that you have bed bugs. Abandoned shell casings are a reliable early sign of a growing bed bug infestation.

Shell casings are translucent, hollow outlines of juvenile bed bugs, and they’re often easier to find than the bed bugs themselves. They can be found anywhere that bed bugs hatch and breed — check mattress seams, upholstered furniture, and in holes, cracks, and crevices within wooden furniture.

As bed bugs go through 5 lifecycle stages before reaching adulthood, they’ll shed their exoskeleton several times. Molting is done at each step of the lifecycle, from the 1st instar nymph to the 2nd instar to the 3rd instar to the 4th instar to the 5th instar and finally to the final adult form.

The result of this process is what we call “shell casings” or “shed skins” in various sizes. This makes identifying shell casings a bit tricky because most people aren’t familiar with the sizes and shapes of bed bug nymphs.

However, if you already suspect bed bugs and you discover yellowish, translucent shells in common bed bug hiding places, then you should consider contacting your local pest control professional for an inspection.

Normally, bed bugs don’t like to wander around unless they need to feed or unless they’re pregnant females avoiding overzealous males. Bed bugs typically tend to find a hiding place and stick to it.

For this reason, many people never see live bed bugs until the infestation becomes severe. Only when their hiding places are disturbed, like when you’re packing for a move, will live bed bugs be easily discovered.

You’d think finding a live bed bug in your home would be a smoking gun, but it’s not always that simple.

Many insects are often confused with bed bugs and vice versa. In our experience, the most common insects that people mistake for bed bugs are spider beetles, carpet beetles, and cockroach nymphs.

Another common misconception is that people think of bed bugs as being the size of apple seeds. This isn’t exactly true — bed bugs are actually quite a bit smaller than apple seeds.

An average apple seed is about 8 mm in length, while adult bed bugs are usually only 4-5 mm long (although after becoming engorged with blood, they can temporarily reach up to 7 mm). Bed bug nymphs are even smaller, starting at around 1 mm in length.

Where Do Bed Bugs Hide?

With their tiny, flat bodies, bed bugs can squeeze themselves into just about any crack or crevice that’s bigger than 2 millimeters.

They tend to hide in the seams of mattresses, in the joints of furniture, inside cracks and crevices within walls and baseboards, and even inside electrical outlets or along the folds of curtains. These are all areas that you’ll want to thoroughly check for the early signs of bed bugs mentioned above.

From our experience as professional bed bug exterminators in NYC, here are some very common examples of bed bug harborage areas:

How to Perform a Visual Inspection for Bed Bugs

To perform a simple visual inspection for bed bugs at home, you’ll need a flashlight and a thin card (could be an extra business card, playing cards, or an old credit card).

We wrote a whole article about what bed bugs look like. Here are some additional tips for recognizing and identifying adult bed bugs:

Still Not Sure if You Have Bed Bugs?

MMPC offers a free Pest Identification Service, so you can simply send a picture of any of the above signs and we will get back to you within a business day to help you confirm if you may have bed bugs. We are also happy to answer any of your questions (free of charge) and provide recommendations for next steps.

Bed bugs are a heavy burden to bear, and getting rid of them is a team effort. Hopefully, you now have a better idea of when to call in that team.

For more articles and information about bed bugs, please see our resource page and pest blog.